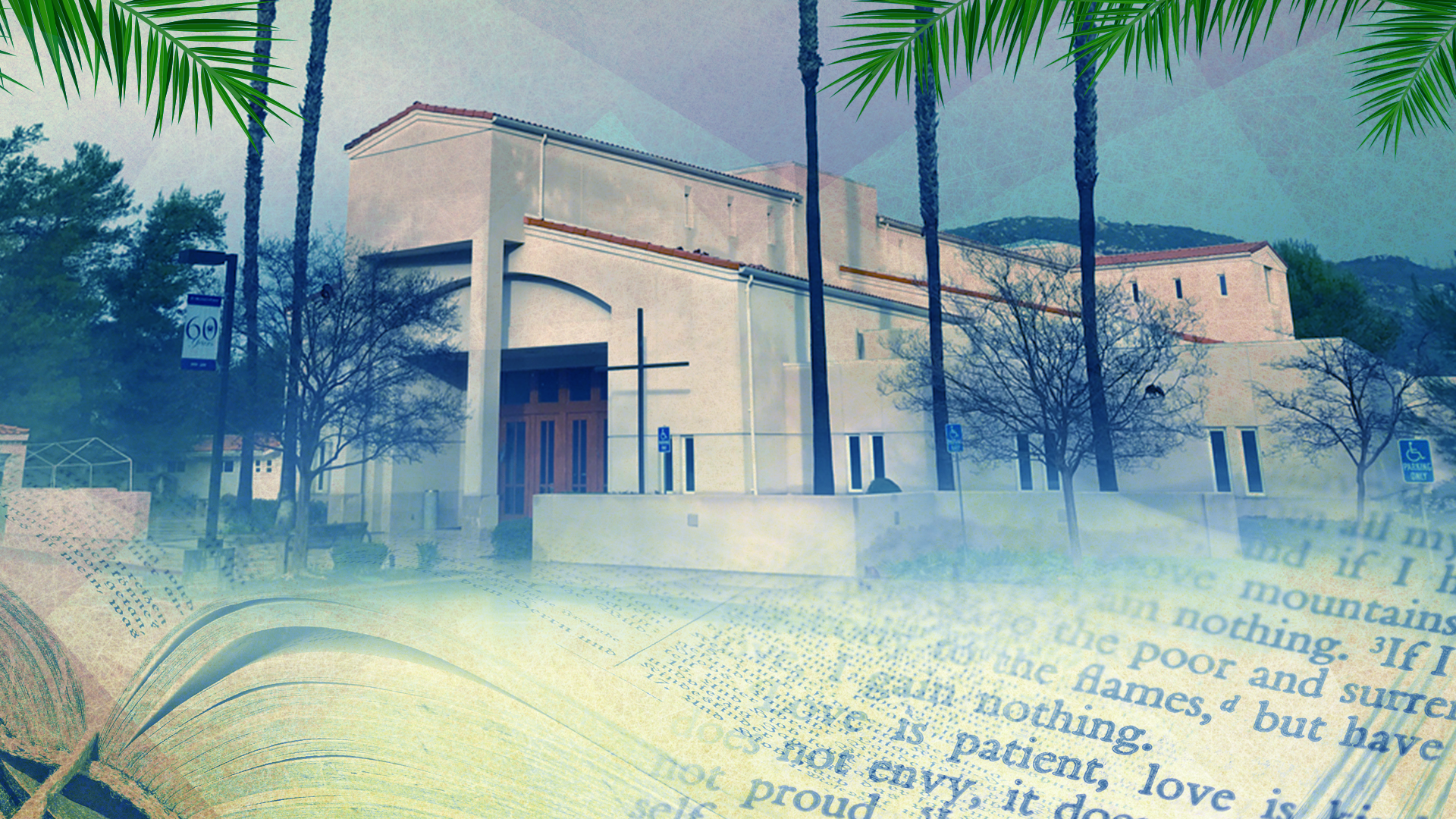 The History of St. Michael's

San Diego’s Bishop Francis Buddy appointed Father Michael Coughlan to start a new parish in Poway in August 1959. In those days, most people didn’t know where Poway was, not however Father Coughlan, as he was an assistant priest at St. Mary’s Church in Escondido. At that time, St. Mary’s in Escondido served the entire area north of Miramar.

When Father Coughlan first arrived, there were only 125 Catholic families in the area south of Lake Hodges and north of Miramar. Today five other parishes serve this same area: St. Gabriel’s, Poway, established in 1973; San Rafael in 1974, Good Shepherd in Mira Mesa, established in 1970, Our Lady of Mt. Carmel in Rancho Peñasquitos in 1976, and St. Gregory the Great in Scripps Ranch in 1985. Some have noted that St. Michael’s, St. Gabriel’s, and San Rafael parishes are named after archangels, causing the area to be referred to as the "Valley of the Angels."

On August 23, 1959, the first Masses were offered in the Big Stone Lodge on Pomerado Road. In June 1960, the present rectory building was completed on seven acres donated by Mrs. Josephine Friedrichs on Pomerado Road. The garage of the rectory served as the gathering place of the parishioners for Mass, Religious Education, and meetings until part of the present school was opened in December 1963. By then, the parish had grown to 400 families and the present seventh and eighth grade classrooms served as the Church. In July 1964, four Sisters of the Poor Clares arrived from Ireland to staff the parochial school, which opened in September. The Sisters lived in a home on Del Norte until the present convent was built in 1966. In 1971, the Sisters of Mercy, also from Ireland, replaced the Poor Clares and served in both the school and parish. It pleased the pastor, Monsignor Coughlan to be able to tell his parishioners on September 24, 1967, “We are happy to announce that approximately one year after completing our convent and classrooms and after meeting our commitments, our parish debt has been completely liquidated! This is indeed a great tribute to the generosity of our good parishioners.”
The parish was still without a permanent Church, so a building fund drive got underway as Monsignor Coughlan bought an additional three acres for the church site. On September 20, 1970, Monsignor broke ground for the new church.

It was indeed a happy day for the then one thousand families when Bishop Leo T. Maher, formally dedicated their first permanent place of worship described as a “simple structure with dignity providing an atmosphere of devotion,” on February 20, 1972. However, the first Mass was offered in the new 750-seat church on Thanksgiving Day, November 25, 1971. It was situated on what is now the North Campus school playing field.

In March 1974, an outdoor statue of St. Michael the Archangel, placed in front of the Church by Pomerado Road, was dedicated and watched over both the church and street. It was moved to its present location at the top of the main driveway on the Feast of St. Michael, September 29, 1996.

The parish now had a church, school, convent, and rectory. Only one building was lacking to complete the parish plant – the Parish Hall. The parish plant was completed in 1977 with the opening of the Hall, which also serves as a basketball and volleyball gymnasium. After celebrating the Silver Jubilee of the parish and being its only pastor for those 25 years, Monsignor Coughlan moved to St. Didacus Church in San Diego.

On July 1, 1984, Father Joseph Finnerty succeeded Monsignor Coughlan as pastor of St. Michael’s. Father Finnerty was well aware of the rigors of establishing a parish, having founded Resurrection Church in Escondido in 1970. Since this parish was built, he looked forward to relief from fundraising and meeting with building committee architects, contractors, etc. However, since there was a need for a kindergarten room, more office space and meeting rooms, plans were formulated for the Parish Center. Bishop Robert Brom broke ground for the new building on May 29, 1990. He also officiated at a celebration of the 25th Anniversary of St. Michael’s School.

A dark day in St. Michael’s Parish history -- July 25, 1990. In the early morning hours, parishioners coming to Mass discovered smoke coming from the church. They called the fire department but all they could do was contain the fire and prevent it from spreading to other buildings. The church was completely destroyed with all its contents. The building was not equipped with a fire alarm, smoke detectors, or a sprinkler system, as none were required when the church was built in 1971. A steel cross was saved from the fire and is now located to the right front entrance of our present church. The other item salvaged was a statue of our Blessed Mother, which is located in the Holy Family Shrine of the present church. Monsignor Finnerty was traveling in Ireland when the fire occurred and said, “While it was a tragedy and great loss, thank God there was no loss of life or limb. The physical building, where the Church of St. Michael worshipped, was destroyed. The Church of St. Michael still exists - the Church is the people. Obviously, this has disrupted our lives and routines. I pray that out of this tragedy some good will come and that it will be a time of spiritual growth for all of us.” Luckily, the Parish Hall was large enough to accommodate the Sunday congregations with the same schedule of Sunday Masses. It served as a church until a new one could be constructed.

In 1991, the Parish Center was completed and in addition to housing the kindergarten and offices for our Youth Ministry and Religious Education Offices, it also served as a daily Mass Chapel until the new church was completed.

Parishioners had input regarding every aspect of the replacement church and its location. The City of Poway strongly recommended the Church be moved away from the street to minimize parking on the street. It was decided to rebuild in the center of the campus away from the school playground and the noise from Pomerado Road. With monies from insurance of $1.135 million and building fund pledges of $1.5 million, the dream of the parishioners came to fruition. The first Masses were fittingly said in the new church on Easter Sunday, April 4, 1993, less than three years after the former church was lost in the fire. On April 25, 1993, Bishop Brom presided at the dedication ceremonies.
Under the direction of Msgr. Finnerty, the school embarked on a program of expansion in 1997. The goal was to double the size of our K-8 grade school.  By 2001, additional land adjacent to the parish grounds had been acquired and plans for construction of new buildings were underway.

Msgr. Finnerty retired on June 30, 2001.  Msgr. Neal Dolan was assigned as the third pastor of St. Michael’s, taking up residence on July 1, 2001.  Under his leadership, construction of the south campus school buildings was undertaken and completed in February of 2003.  Not only did the school continue to grow, adding a pre-school, but the parish and its programs did as well.

By 2006, the parish recognized the need for a building large enough to accommodate our community’s activities.  A pledge drive began, plans were drawn up, and by March of 2011 the Holy Family Center at the south end of the campus was dedicated and opened.
Following Msgr. Neal Dolan’s 50th anniversary of ordination and retirement in June of 2014, Fr. John Dolan (no relation) was named new pastor. Fr. John worked to build on the small church community program already established.  Renewed emphasis was placed on the Corporal Works of Mercy. Steps were also taken to invigorate our parish’s communications and online presence.

While pastor at St. Michael’s, Fr. John was named as Vicar of Clergy by Bishop Robert McElroy. As a result of his increased responsibilities, in the summer of 2016, Fr. John was transferred to a parish closer to the diocesan offices.
Fr. Mel Monreal, who had previously been an associate pastor at St. Michael’s from 2005-2014, and most recently had served as pastor for two years at St. Columba’s parish in San Diego, returned in October of 2016, this time to shepherd St. Michael’s as the fifth pastor.

This merely chronicles the physical growth of St. Michael’s and does not, nor cannot, record the spiritual growth that has occurred over these almost 60 years. At this time, St. Michael’s has more than 3,900 registered families. St. Michael’s is a vibrant community.  There are many parish organizations and areas for service as we seek to respond to the needs of our community, and venture toward the peripheries.

We hope this introduction to our community’s history has been helpful. Thank you for your interest. May God bless you as he has blessed us.